A rendering of the newly proposed Lorain Avenue with a cycle track. [Bike Cleveland] For more than a decade, community developers on Cleveland’s near West Side have been working to create a new, improved streetscape on Lorain Avenue, between West 25th and West 65th streets. It was always about more than potholes and pavement: Their ambitious plans envisioned a street for people and bikes as much as cars, one that not only had smooth new pavement, curbs and sidewalks, but also a new cycle track or bike trail that would make the street safer for bicycles, safer pedestrian crossings, and better transit waiting environments for bus riders.

In short, a complete and green street for all. In Cleveland. Finally.

The new Lorain Avenue, planners promised, would go far beyond the painted bike lanes that are now sprinkled throughout the city and which get scraped off by snow plows, become faded in the sun, and are slalomed over by heedless drivers. In fact, the Lorain plan was modeled after the eight-mile Cultural Trail in Indianapolis, which has attracted millions of dollars in reinvestment to the city. Excited by the vision, and with the near West Side taking off, developers flocked to Lorain Avenue, as evidenced by investments from Platform Brewery to the Urban Community School campus.

Yet now, it turns out, the long-envisioned Lorain Avenue Cycle Track may not happen at all. Or if it does, it could be so watered down as to hardly resemble the original, bold vision. That has led to a standoff of sorts with local advocates and council members seeking to ensure that Lorain Avenue gets rebuilt in the way that got them pumped up back in 2015.

A crowd discusses proposals for Lorain Avenue during a planning meeting. [Brian Fyfe]

“The city has secured some funding, but not enough,” the website states. It has $11,823,000 available, including $2.3 million from city of Cleveland road and bridge bonds, $1.5 million from the Northeast Ohio Areawide Coordinating Agency’s (NOACA) transportation alternatives program, $1.9 million from the Ohio Department of Transportation’s urban paving program, and $6.1 million from NOACA’s Congestion Mitigation and Air Quality (CMAQ) program.

“Additional funding sources have been and will continue to be pursued, but in the meantime the pavement continues to deteriorate, and the construction date remains uncertain,” the site continues. “This website compares the cycle track option to other options, including bike lanes, that could be implemented at less cost and sooner. Some options could serve as interim treatment while additional funds are raised, keeping in mind that this interim treatment could last several years.”

In a recent article for Cleveland.com, reporter Steve Litt punningly points out that the city seems to be “backpedaling” on its plans for Lorain. While advocates were happy to learn that the Jackson administration had sought $32.5 million in federal money to complete the Midway bike project, he writes, “they’re dismayed that the city appears to be backpedaling on building the 2-mile Lorain Avenue project as a sidewalk-level, two-way cycle track from West 20th to West 65th Street — even though the city’s Planning Commission approved the concept in 2015.”

Ohio City Inc. Executive Director Tom McNair told Litt, “We have this one opportunity to do this right and create our model of the Cultural Trail. If we do something else, we’re going to lose that opportunity.” 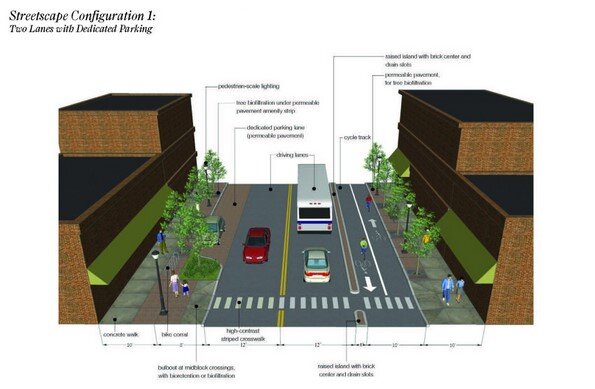 The city did not respond to interview requests for this story, but The Land’s reporting has found dismay at how the city develops plans then discards or changes them.

“The city of Cleveland has a long way to go in realizing real, complete and green streets,” Ward 3 Councilman Kerry McCormack, who represents Ohio City, told The Land in April. “It’s extremely frustrating when plans don’t include them or include a watered down version. It’s a question of equity and economic development. We don’t have to study the issue. In places that have prioritized complete and green streets, like Indianapolis and Pittsburgh, it has helped to spur connectivity for people. We are unacceptably behind in Cleveland.”

Following an inquiry from Cleveland.com, the administration issued a statement to Cleveland.com stating cryptically, “No determination has been made on a final track design. While advocates may favor one design over another, analyses and process must take its course.”

Bike Cleveland also has advocated for the city to consider street-level protected bike lanes on Lorain Avenue, but that option is apparently not on the table, according to the city’s website.

“The cost of this project is inflated due to the planned ‘sidewalk level’ Cycle Track – which requires heavy reconstruction to widen the sidewalk area and modify related infrastructure,” Bike Cleveland wrote in an action alert. “There are worldwide examples of successful Cycle Tracks that are at street level and we believe this should be an option. Street level cycle tracks utilize planters, bollards, and other measures to create a low-stress bike facility – while allowing the existing curbs/drains/infrastructure to remain unchanged at a drastically lower cost.”

At the heart of the issue, advocates have said, is the fact that the city of Cleveland has time and time again failed to follow through on its plans for comprehensively improving cycling and pedestrian infrastructure.

“I give the city credit for doing what it’s done so far,” Jacob VanSickle, executive director of Bike Cleveland, told The Land in a recent interview. “But as we look down the barrel of climate change, and we look at issues of health and equity especially in east side neighborhoods, we certainly can do better when it comes to making it safer for people to bike and walk.”

And it’s not just an issue of money, either. The city missed opportunities to apply for federal funding for the Lorain Avenue cycle track in 2018, 2019, and 2020, according to Bike Cleveland. It remains to be seen if they will hit the July 12 deadline for federal RAISE funds this year. 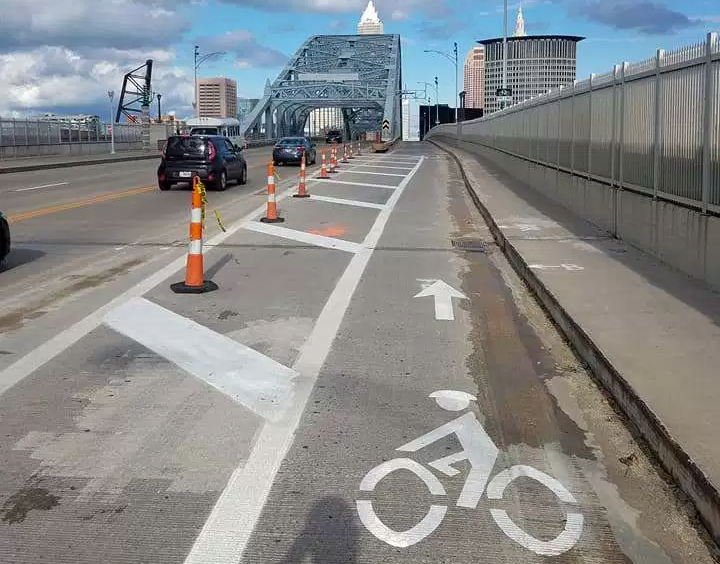 As VanSickle rightly points out, the city is significantly more bike-friendly than it was a decade ago, and this has made a difference. The more than 100 miles of bike lanes and trails throughout the city, as well as completion of the Towpath, the Lake-to-Lakes Trail and many others, attest to this success. However, much like painted bike lanes that too frequently end in a busy intersection and cut off opportunities for safe riding for cyclists, the city’s plans too often fall short of getting it right.

Safer, more bike-friendly streets are not just important to wealthier, gentrified communities – they’re important to Cleveland. As writer, Detroit Shoreway resident and transportation expert Angie Schmitt pointed out in an interview with The Land, “The most dangerous road in the region by far is Kinsman Road. You can find a map of all the most dangerous roads in Cleveland here. If you look at the map compared to a map of racial segregation in Cleveland, you will notice that almost all the most dangerous roads are in black or brown neighborhoods. It matches up to the map of historically red-lined neighborhoods almost perfectly.”

The most disturbing thing about the city’s approach to redoing streets is that while the administration pays lip service to citizen involvement, what they ultimately do sometimes bears very little resemblance to the feedback they receive, advocates say. Even when people do participate, their plans are often thwarted by turgid, tone-deaf leadership.

"We've been told we can't do this for an awful long time, and every time we've been told that, we came up with reasons why we could,” an “ecstatic” McNair told Litt when the Lorain Avenue plan was first approved by the Cleveland Planning Commission way back in 2015.

And now, it turns out, maybe they can’t. But advocates say they’re not giving up. While waiting for a response from the city, they’re organizing around safer, more bike-friendly streets.

To learn more about plans for Lorain Avenue and get involved, visit the city’s website, Bike Cleveland or OCI.

Lee Chilcote is founder and editor of The Land.

35% Of Fatal, Serious Pedestrian Injuries Happen On 7% Of...